Okra Without the Slime 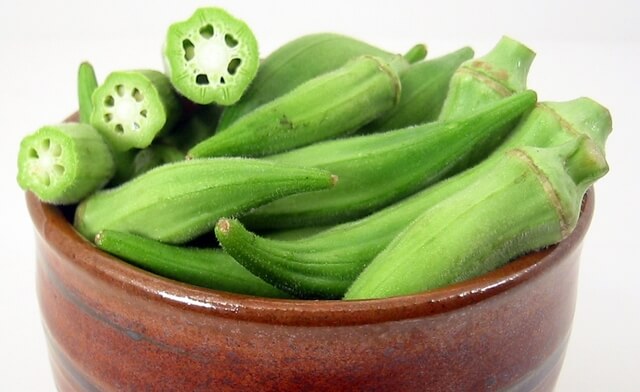 Inspired in part by Shuna of Eggbeater, I have been cooking okra since it started appearing at the Farmers’ Market in Berkeley

Okra is one of those “binary foods” where people seem to hate it or love it (also in this family are mushrooms, seaweed, and tofu). The hate is usually because of the gooey slime that coats the okra, but it doesn’t have to be that way.

My experience to date is that okra becomes slimy when cooked in a watery environment — in a stew or a steamer basket, for example. Stir-frying or sauteing in hot oil, in contrast, keeps the slime within the okra pieces, or perhaps causes the moisture in the mucilage to evaporate, thus improving the pods’ texture.

Before I get to the cooking methods, a little bit about okra and its slime. Okra is in the mallow family (Malvaceae), a group of plants that have exude a gelatinous substance when sliced. This substance is called mucilage. At the time of this post’s publication, AccessScience has this in their free preview of the mucilage entry:

Mucilages are not pathological products but are formed in normal plant growth within the plant by mucilage-secreting hairs, sacs, and canals, but they are not found on the surface as exudates as a result of bacterial or fungal action after mechanical injury, as are gums. Mucilages occur in nearly all classes of plants in various parts of the plant, usually in relatively small percentages, and are not infrequently associated with other substances, such as tannins. The most common sources are the root, bark, and seed, but they are also found in the flower, leaf, and cell wall. Any biological functions within the plant are unknown, but they may be considered to aid in water storage, decrease diffusion in aquatic plants, aid in seed dispersal and germination, and act as a membrane thickener and food reserve.

Certain cooking techniques will prevent your okra dish from being overly slimy. Stir frying is one of the techniques. The cuisine of India has many methods of okra preparation, and I tried three from my Indian cookbook library, and also tried an improvised stir-fry based on advice from a farmer at the Berkeley Saturday market.

Julie Sahni’s Classic Indian Vegetarian and Grain Cooking contains a recipe for whole okra braised with tomatoes, onions and spices. This recipe resulted in mostly unslimy okra, but was very messy because trimmed, whole okra pods are fried in a shallow pool of oil in a frying pan until tender, thus leading to many splatters across the side of the kitchen that houses my stove.

Indian Home Cooking by Suvir Saran and Stephanie Lyness has two okra recipes. The first (Okra in a Spicy Tomato-Onion Sauce) started off in a bad way. The recipe requires that you slice the okra into rounds, and as I did so, slime was pouring out of the cuts. But cooking the okra in a mixture of sauteed onions and spices prevented that slime from ruining the dish for me. My adaptation of the recipe is listed below.

The second Saran/Lyness recipe (Crispy Okra with Spices) used whole okra, which were coated in spices and sauteed in oil. It was very easy to cook, but eating was another matter. Some of the larger okra pods were exceptionally slimy, and quite unpleasant to chew. I think that perhaps my okra pods were too large for this treatment, and that 3-4 cm long pods would be preferable.

My most recent attempt was a simple stir fry. I prepared some vegetables: okra in 1/2″ rounds, onions in slices, long beans in 1″ lengths, and red bell pepper in thin rectangles (1″ by 1/4″). I combined minced garlic, minced green chile, and minced lemongrass in another bowl. Heat some oil in a wok or large skillet. When hot, toss in the garlic, chile, and lemongrass. Stir for 30 seconds, then add the vegetables. Stir fry until the vegetables are about one minute from being done to your liking. Add some soy sauce, water and perhaps a mixture of water and cornstarch (to thicken the sauce), saute for a minute, and then serve. The okra I made using this approach had a pleasant and non-slimy texture, but the sauce was one-dimensional. Perhaps next time I’ll try using a curry paste as the flavor base. 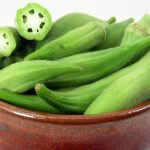 Okra in a Spicy Tomato-Onion Sauce