As a follow-up to my piece on okara — which is a by-product of tofu — I’m happy to report that I have finally seen okara “in the wild” and gave it a try.

When I visit San Diego for work, I often stay in the Kearny Mesa area near the intersection of CA-163 and I-805, which is known for its concentration of Asian restaurants (and apparently also its car dealerships). One night, a colleague and I found Wa Dining OKAN in the back corner of a mini-mall at 3860 Convoy Road and decided to give it a try. It’s a tiny place that specializes in Japanese cuisine, offering a selection of daily “tapas” (their word, not mine) set out on the dining bar in the middle of the room, along with daily specials and non-rotating menu items. 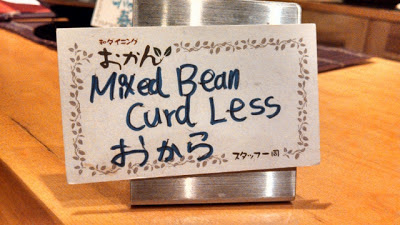 The night we visited, there was an intriguing sign next to a tapa near me: “Mixed Bean Curd Less” (and also in Japanese, as the photo below shows). I guessed that they meant to write “Lees” instead of “Less,” and since the leftovers of a process are often called “lees”, I deduced that the dish must be based on okara. A query to the waitstaff confirmed that deduction, and so I ordered a bowl.

It was a cold dish of okara with various vegetables (hijiki, fresh edamame, carrots, etc.) and seasoning (soy sauce, ginger and sesame oil). If you think tofu as fairly flavorless, well, tofu has nothing on okara, which I found to completely disappear into the background. While tofu has a slight sour flavor and sometimes a silky texture, the okara was somewhat “dusty” and anonymous. Overall, the dish wasn’t bad, and I might order it again simply because it is the rarely sighted okara.