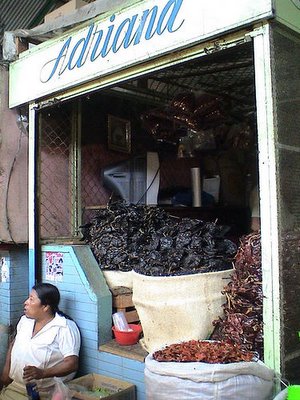 Photo from Hummanna, subject to a Creative Commons License.

In my Week of Eating post, one of the frequent meals was enmoladas — corn tortillas covered in mole sauce. There are as many recipes and variations for mole as there are cooks. But in general, a mole is a paste of made from some of the following ingredients: chilies, nuts, seeds, spices, greens, chocolate, bread, fruit, and other ingredients. After a personal story about mole, I’ll present excerpts from a New York Times article to show more of the history (or speculation) and specifics of mole.

My Mole: Smoke and Splatting

I once made the mole negro from Nancy Zaslavsky’s A Cook’s Tour of Mexico, and it was one of the most harrowing cooking experiences in my life. Although the recipe was well written, it didn’t fully prepare me for what was to come. This mole consisted of three kinds of chilies, almonds, raisins, white sesame seeds, black peppercorns, cloves, thyme, oregano, onion and garlic. The process was tricky and messy: lots of smoke (one of the early steps: “Cook the chile seeds and stems with 3 tablespoons of oil until the seeds turn black. Yes, open the windows, turn on a fan, cover the smoke alarm, then burn the seeds and stems to black-black.”), a difficult to blend mixture (at least with my old blender), hot blobs of sauce flying into the air as I simmered the sauce for an hour to thicken it, and more excitement. But in then end, I was left with a complex, aromatic paste that I kept in my freezer for many months, pulling out a container every now and then to make a batch of enmoladas.

The New York Times in Puebla

The New York Times published a story about the city of Puebla, Mexico and its culinary appeal, with particular attention on the moles of the city (Wikipedia entry on Puebla). Below, I have extracted just the parts that describe the sauce and its history (and also stopped italicizing “mole”):

When most Americans hear the word mole (pronounced MOH-lay), they often think specifically of mole poblano, but there are several types of moles, in a variety of colors and flavors — and not all of them include chocolate.

For years, mole was a special-occasion dish only, the preparation notoriously time-consuming. But all of these powders and pastes were ready to roll — add a dash of oil and chicken broth, and you’ve got a delicious mole in minutes. This was good news for hardworking homemakers, but I wanted to get back to the beginning of mole. I needed to find Puebla.

To say that there is competition in Puebla over where to eat your mole poblano is an understatement. Almost every restaurant in town promotes the dish, and many hosts stand outside beckoning to passers-by. Signs everywhere shout ”Típico!” — a reassurance to customers that yes — yes — here, you will find the authentic food of Puebla. But many Poblanos still cook the best moles at home, and it can be difficult to find a great one among the masses.

Mole itself is evidence that the Indian culture was never defeated. Though the invention of mole poblano is usually attributed to a Spanish nun, the word itself comes from the Náhuatl Indian word molli, meaning ”concoction” or ”sauce.” And most food scholars agree that some form of the sauce dates back to pre-Hispanic times.

There are a few legends detailing the origins of mole poblano, but Mr. Hernández spun out the most popular — a mid-17th-century nun, Sor Andrea de laAsunción of the Santa Rosa Convent, was asked to create a special dish for a visiting archbishop. After class, I walked over to the enormous Talavera-tiled kitchen where it all went down and tried to imagine the beautiful chaos that must have ensued.

BUT here’s the burning question. If a mole can be any number of different sauces, what differentiates it from, well, sauce? As the chef Zarela Martínez, of the New York City restaurant Zarela, defined it: ”A mole is a puréed main-dish sauce with chilies, either fresh or dried, and other ingredients, such as fruits, vegetables, herbs and spices, with a thickener. This could be seeds, nuts, bread, masa, corn tortillas or a combination of the above.”