When I first saw Mock Tomata Sauce on my screen, I had a few thoughts. First: ????. Next: I need to try this. And then: this reminds me of the delicious mostarda spread / sauce in the Gjelina cookbook (a concoction of lightly fried apples, coarse mustard, rosemary, etc.), so it will probably taste good.

Unfortunately, Kitchiner doesn’t explain why he includes this mock recipe (or any of the others — there are more than 15 “mock” recipes in the book).

These days, you might see a recipe like this in a collection of nightshade-free recipes, but back in the early 1800s they had a different motivation.  At first I thought that it might be related to the early fear of tomatoes in Europe — they were regarded with suspicion for quite a while after their introduction from the Americas — and that this might be a way for someone to get a sense of why some people were saying that tomatoes were actually tasty. But it might actually be the opposite. In his 1994 book Tomatoes, food historian Andrew Smith writes that by the turn of the 19th century the English liked tomatoes, but their availability was infrequent, even in canned/jarred form. So for a mid-winter fix, you might want to turn to a staple from your root cellar: apples.

The Mock Tomato Sauce is easy to make, basically applesauce plus some savory elements.

I made some changes to make the preparation more like a regular tomato sauce: I sautéed some shallots and garlic in olive oil, added the apples and water, then simmered for a while, mashing the apples periodically to get a smooth sauce.

The Mock Tomata Sauce is OK. Both tomatoes and apples are fruit, after all. Both have a good amount of acid.

I made a “pizza-sauce version” for homemade pizza and it was tasty. During my recipe tests I also used the sauce in open face sandwiches (toast bread, slather some mock tomato sauce, top with a cheese like sharp cheddar, and broil to melt the cheese).  After all of these tests and tastes, I can see why this made it into Kitchiner’s book. 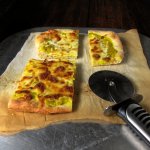 An interesting replacement for tomato sauce, this one uses apples instead. The recipe is based on one published more than 200 years ago.
Course Sauce
Cuisine Italian
Prep Time 5 minutes
Cook Time 20 minutes
Total Time 25 minutes

Based on a recipe in Apicius Redivivus; Or, The Cook’s Oracle, by William Kitchiner (1818), who based his recipe on one by Alexander Hunter (“Ignotus”) in Culina Famulatrix Medicinae: Or, Receipts in Cookery… (1804).

Again referring to Smith’s book, it turns out that Kitchiner’s recipe was based on one in a book that contained the second oldest tomato recipes in English:  Culina Famulatrix Medicinae: Or, Receipts in Cookery…, by Dr. Alexander Hunter, a physician from Scotland.

For comparison, below I show the Mock Tomata sauce recipe from Hunter (mid-sentence capitalizations and “tomata” in original). Kitchiner’s substantial changes to the ingredients are leaving out the garlic and salt.

Take any quantity of sharp-tasted apples, and reduce them into a pulp as in making apple sauce. When pulped, put it into a marble mortar, with as much turmeric as will give it the exact colour of tomata sauce4, and as much Chili vinegar as will give it the same acid that the tomata has. When uniformly mixed, give a gentle boil in a tinned sauce-pan, having previously shred into each quart, half an ounce of garlic, an ounce of shalot, and a little salt. When cold, take out the garlic and shalot, and put the sauce into stone bottles. This sauce should be of the consistence of a thick syrup, which may be regulated by the chili vinegar.

The only difference between this and the genuine tomata sauce, is the substituting the pulp of apple for the pulp of tomata, and giving the colouring, by the means of turmeric, a powder that constitutes one of the ingredients of the curry powder.