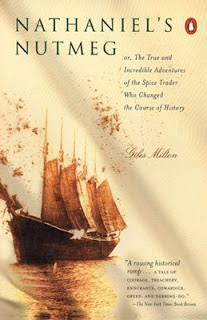 When I went looking for a book to read on the long flight from Singapore to San Francisco (and during the several hour layover in Hong Kong), I wanted to find something about Southeast Asia.  I ended up choosing Nathaniel’s Nutmeg: or, the True and Incredible Adventures of the Spice Trader Who Changed the Course of History.

Nathaniel’s Nutmeg tells the story of the 16th and 17th century race to the spice islands between the European powers, primarily England and Holland, but also Spain and Portugal.

Like the previously reviewed Spice, the first part of this book is engrossing, thrilling, and shocking as Milton describes the earliest attempts to find routes from Europe to the spice islands.  Europe had been trading for spices for centuries, but now they wanted to cut out the middlemen and buy direct.  Most of the spices they sought — nutmeg (which was supposedly a cure for the black plague) and cloves in particular — were exclusively grown on tiny islands that make up part of modern day Indonesia (The Banda Islands, in particular, a small chain roughly halfway between Sulewesi and New Guinea. The “location” tool on this blog post is pointed at one of the islands chronicled in the book.).

In the 16th and 17th century, sailors were lacking a few important pieces of knowledge, like how to determine longitude or how to prevent scurvy. Accurate maps were also rare.  So essentially these brave, greedy, dedicated, or foolhardy adventurers would literally head into the unknown looking for a few small islands in an endless sea.

The tales of these often horrible voyages were quite interesting, if bleak. Crews of hundreds of men on several ships would leave the docks in Europe, and a few months or years later, only 10 or 20 percent would return, the rest having perished to scurvy, dysentery, angry natives, or something else. There were also attempts to reach the East Indies via a northern route, either going around Canada or above Russia. For some reason, it was thought that there was open ocean above North America and Europe, so it was just a matter of going far enough north.  They soon learned that the top of the Earth had plenty of ice.

Unfortunately, the middle of the book is confusing and tiring, as the author details the often trivial struggles over the islands, the business details of the companies financing the trips, and too many individual voyages.

The last part of the book is a little better, as it focuses on the final battles between the Dutch and English for the Banda Islands.  But it didn’t capture my interest like the beginning — the focus was too narrow, I suppose (even though the events had tremendous historical significance).