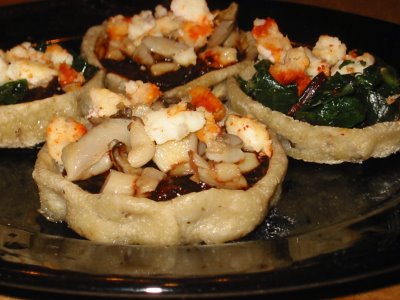 In Mexican cuisine, there is a large, popular, and delicious class of foods called antojitos (“little whims”). These whims include quesadillas, taquitos, tostadas, and one of my favorite appetizers: sopes. Sopes are little bowls of a corn-based dough that are baked on a griddle and then filled with spicy and savory toppings. They consist of a base (corn masa), filling (salsa, vegetables, meat), and garnishes (aged or fresh cheese, chopped cilantro, diced onion). Each of these elements can be prepared independently and then brought together at the time of the final cooking. Like many of the other antojitos, sopes are best eaten almost immediately after they are removed from the griddle.

Preparation
The first step is to prepare the base, which is made from field corn that has been treated with lime, cooked, and then ground into a paste called masa. Freshly-made masa is the most flavorful, but can be hard to find. Even in cities with large Mexican populations it is sometimes available only on weekends (look for bags near the cash registers or in the tortilla section). Tortilla factories might have them all week long, and I have heard of restaurants selling masa to the public. Masa comes in two varieties: para tortillas (for tortillas) and para tamales (for tamales). The tortilla variety is much smoother, and preferable for this use. Masa freezes well, so when I buy a 3 lb. (~1.5 kg) bag, I divide what I’m not going to use that day into several packets and put them in the freezer for future use.

If you can’t find fresh masa, the dried version (masa harina) is a decent replacement. It is sold in bags at a wider variety of stores, including many chain supermarkets. To make the dough, simply add warm water and mix until it is a smooth paste. I don’t know the exact water-to-flour ratio; check the bag for guidance.

It is a good idea to have your fillings ready before you start on the sope base. In the summer, I love tomatillo or tomato salsa (it won’t be long before tomatoes are in the farmers’ markets again!). In other seasons, I need to think outside the tortilla, so to speak. Most of the year, the Farmers’ Market is full of greens like chard and kale, and also fresh mushrooms. Shelf-stable items like dried chiles and sun-dried tomatoes can make a great salsa (see the Winter Salsa post).

The Method
After the dough is ready, form it into small balls, about 1-1.5″ in diameter. One by one, take a ball and flatten it by hand or gently in the tortilla press. I find that the handle of the press is not necessary, and that the disk can be flattened simply by manipulating the top portion. The disk should be about 1/4″ thick (6 mm). Remove the disk from the press, and place it on a ungreased heavy griddle or skillet that has been preheating over medium heat.

Ready to press a disk 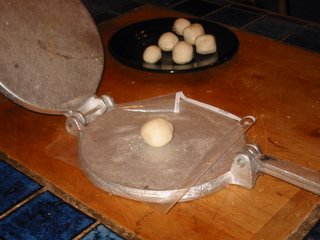 The dough is baked in two stages. In the first stage (shown below), the dough disk spend a few minutes on each side in this stage, until each side is dry and speckled with brown spots (second photo below). As each disk finishes cooking, remove it to a plate to cool for a few minutes.

The first stage of baking 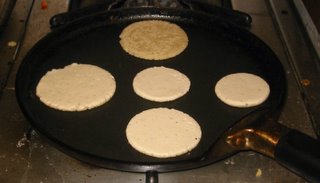 The next step is to make the edges which will hold the filling. When the disks are cool enough to handle (but still warm enough to be uncomfortable), grab the edge of a disk with your thumb and forefinger. Using your thumb, break through the crust and then pinch up a border. The height of the border should be at least a few mm, but its eventual height depends on the thickness of the disk, how deep your thumb went into the disk, and the heat resistance of your fingers. 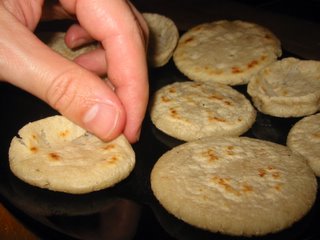 The second stage of baking heats the fillings and crisps the bottom of the sope. Put the same skillet or griddle you used previously, over medium heat, and when it is hot, pour a tablespoon or more vegetable oil into it. When the oil is hot, carefully place the sopes into the oil, then fill them with whatever you made previously. Cook until the filling is warm and the bottom has turned golden brown and crispy. Remove to a plate covered with paper towels, top with garnishes and serve.

The second stage of baking 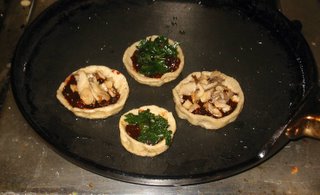 Blog History Note
A while ago I presented what I called “Boat Chaat“, a small wheat-flour dough bowl that was filled with spiced Indian dal (whole urad dal, in this case) and cooked on a griddle. My inspiration for these boats was the sopes described above. Several commenters on my post noted that corn and corn flour are popular in Punjab, and that a similar filled snack called katori chaat is part of the Indian chaat menu (according to Divine Cuisines, a katori is a small bowl that is used on a serving tray).