Salad of Wakame, Cucumber and Radish Sprouts with Smoky Vinaigrette

When it comes to salads, I’m much more interested those made with vegetables, fruit, nuts and other ingredients than anything with lettuce or other leafy greens – creations like the Tosa sea salad in Washoku, Elizabeth Andoh’s splendid book about Japanese home cooking. It has three main ingredients – cucumber, wakame and radish sprouts – and a delicious slightly smoky dressing. The slight sweetness of the cucumber, the mellow oceanic nature of the wakame, and the sharp bite of the sprouts are an unlikely trio that goes great together and meshes with the smoky vinaigrette.

The vinaigrette is where I make a major diversion from Andoh’s recipe. In her recipe, the smoke flavor comes from katsuo-bushi (dried bonito flakes), a specialty of the recipe’s namesake, the region of Tosa on Shikoku Island (not the dog; see map at the bottom of the post). To bring smoke into the dressing while keeping it vegetarian, I use lapsang souchong tea, a Chinese variety that has been dried over burning pinewood fires, thus imparting it with a smoky essence (so much so that I wonder how anyone can drink it straight.).

Before we get to the recipe, a side note about wakame (Undaria pinnatifida): this variety of kelp is native to Asia, but is an aggressive invader, earning a place on the IUCN’s list of the 100 worst invasive species. In recent decades, it has become established in Europe, New Zealand, Australia and Southern California. Just last year, it was spotted in San Francisco Bay for the first time, a worrisome new development for an already highly damaged ecosystem, as an article in the San Francisco Chronicle reports. Even if we all regularly ate the Tosa sea salad we’d probably barely make a dent in the invader’s population. 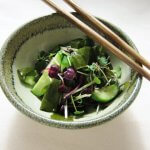 1. Wakame can be found in stores that specialize in Asian products, especially those with a Japanese or Korean tilt. It usually comes in small plastic bags that don't seem to hold much, but it expands a lot when rehydrated.

2. Radish sprouts are grown from daikon or radish seeds. Since they are sold by a sprout specialist at my local farmers market, I haven't looked for them elsewhere, but would guess that you could find them in natural food stores or Japanese groceries.

Adapted from Washoku, by Elizabeth Andoh.

I use lapsang souchong tea, a tea that has been dried over pinewood fires, to bring smoke to the dressing in a natural and vegan way.

Lapsang souchong, a tea that has been dried over burning pinewood fires, is used to impart a smoky flavor to the viniagrette. Andoh's original recipe calls for 1/3 cup loosely packed katsuo-bushi, a variety of dried bonito with a smoky flavor. The fish flakes are sprinkled over the simmering liquid and heated for 30 seconds before turning off the heat.

For details about caffeine in tea, see my posts on the subject: A Scientific Paper about Brewing Tea and How Brewing Conditions Affect Caffeine Content in Tea.

Adapted from Washoku by Elizabeth Andoh.