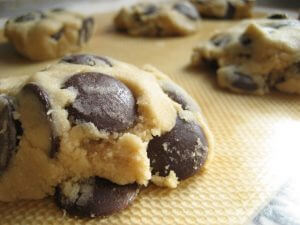 Two years ago, I reported on a failed experiment: an unholy alliance between nutrition and cookies in which I added amaranth seeds (little nutritional powerhouses*) to chocolate chunk cookie batter before baking. The unpleasant results made me wary of such experimentation.

Many months later, I received Robin Aswell’s “The New Whole Grains Cookbook” as a gift and found that it contained a chocolate chunk cookie recipe with a health boost in the form of toasted buckwheat groats (also called “kasha”). Whether or not these cookies are much healthier than a standard cookie is hard to say — and is probably irrelevant, they are cookies after all — but I gave them a try because I think that buckwheat and chocolate make an superb pair.

On one level they were a success: the flavor was excellent and the crunchy groats were an interesting change of pace. But on another level, the texture never turned out quite right — perhaps it is the recipe’s specification of room temperature butter and baking soda instead of slightly chilled butter and baking powder, or perhaps I didn’t adapt my baking habits to the batter’s special needs. I liked the combination of toasted buckwheat and chocolate so much that I brought flavor pair to my favorite chocolate-chunk cookie, pouring in about 1/2 cup of roasted buckwheat groats along with the chocolate chunks. They were a great success — thanks in part, of course, to the underlying recipe — with the crunchy buckwheat pieces offering a foil to the soft cookie matrix and an interesting flavor contrast to the chocolate. In the end, it’s clear that the reason they were a success while the amaranth experiment was my motivation: it was about flavor, not purely a nutritional boost. If you like the taste of buckwheat, try adding a handful of kasha to your next batch of chocolate chunk cookies, cocoa cookies, or brownies.**

* A piece by Don Lotter at Rodale’s New Farm looks at the potential of amaranth to improve the lives of poor Guatemalen peasants. Lotter summarizes the nutritional benefits of amaranth:

Amaranth enjoys a protein content of a remarkable 16 percent and is two to three times higher in lysine than most other grains. In fact, this important amino acid is low in most other grains and is perennially deficient in the diets of the rural poor in countries such as Guatemala. Amaranth is also 4 to 8 times higher in calcium and 3 to 5 times higher in iron-both critical elements for nutrition-than other common grains such as corn, wheat, and rice. In fact, when rated by nutritionists for general nutritional quality, amaranth scores significantly higher than other common foods such as milk, soy, wheat and corn. Amaranth’s digestibility score is an impressive 90 percent, much higher than problematic foods such as soy, milk and wheat.