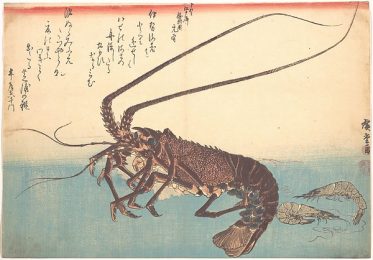 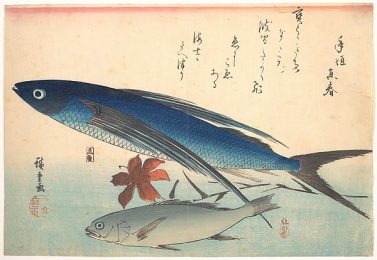 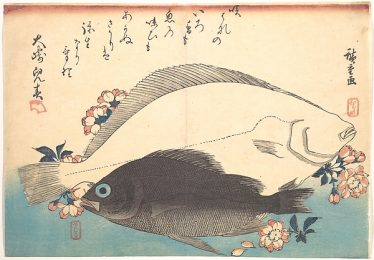 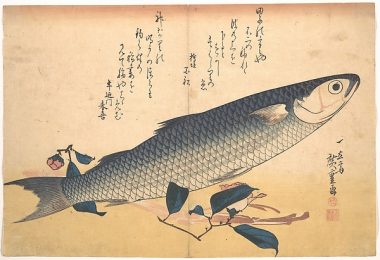 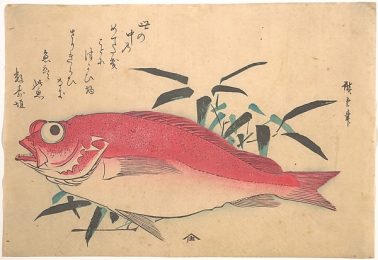 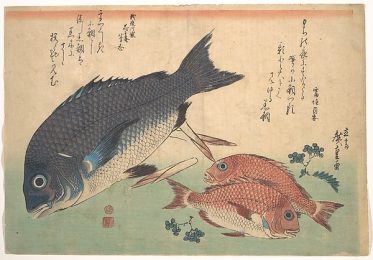 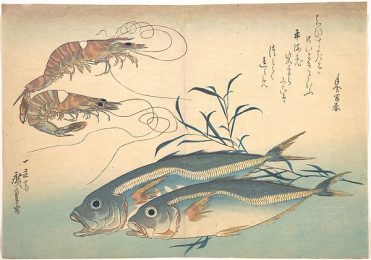 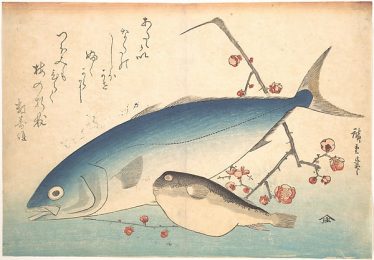 One of my favorite genres of art is the 19th century Japanese landscape print, especially the works by Utagawa Hiroshige (1797-1858), who is best known as the creator of several series that showed famous scenes from Japan, like “53 Stations of the Tokaido” and “Famous Views of the 60-Odd Provinces.”  The subjects of the prints in the series vary between the long and medium view — for example, a rainbow over a the sea, or travelers passing over a bridge.  So when I saw a series of Hiroshige fish prints appear in a Creative Commons CCSearch result, my curiosity was piqued.  What was the story behind the series?

It turns out that prints of animals, fish and plants were relatively rare in Hiroshige’s catalog:  in his 40-year art career, he designed over 10,000 single sheet prints and several hundred book illustrations, with only around 500 having an animal or plant as the subject [the statistics are from Birds and Flowers, a book in the reference list below].

After reviewing a few books about Hiroshige at the local libraries, I found the answer to my question, and it turned out to be straightforward: a poetry guild called Kyokashi hired him to make ten fish illustrations to accompany their poems.  During the design and printing process the poets gave their poems to the woodblock carvers, who added the lettering to a block so it would appear on the final print.

In the decades before Hiroshige was active, Japan started opening up to the world. One of the results was the translation of numerous European scientific books into Japanese — anatomical textbooks, botanical and zoological encyclopedias, and much more. In her book about Hiroshige, Adele Schlombs argues that his fish prints were possibly influenced by the imported books in two ways: 1) perhaps he wanted to break from the idealized style of traditional Japanese art and design more realistic depictions of the natural world like the books contained (the trout print below is a good example of this), 2) a “nature morte” styling of still-lifes, where the creatures were simply set against a blank background, which had no tradition in Japanese painting (the prints in this post follow this approach, except for the trout).

Hiroshige made around twenty fish prints in the 1830s. The first batch of ten were made for the Kyokashi poetry guild, but the books I consulted did not say if the same guild commissioned the other ten prints, not were they specific about the chronology of the prints (i.e., which were in the first series?). The were clearly made for poets or fans of poetry because they each contain one or more poems (the book Hiroshige: A Shoal of Fishes has translations of the poems on each print).

Of the Hiroshige fish prints I have found on the internet, trout is definitely my favorite.  It captures the motion of trout in river and also has streaks of the magical blue that is in many of my favorite Japanese prints (the pigment called Prussian blue).

The poem on the trout print is by Haruzono Shizue. In Schlombs’ book it is translated as

The falling of the autumn rain does not disturb the beauty of the trout in the Tamagawa river, no dirt has sullied their shining skin.

In the Shoal of Fishes book, the translation contains a lovely image

While the noisy autumn rain falls on the river, the trout swim in the shadows soundlessly.

In the book about the Baur Collection, the translation is quite different,

Even when autumn rains are falling, it swims in the shadow of the water and one doesn’t see rust: the trout of the Crystal River [ed. note: apparently these are “rust trout” (sabiayu)].

Among the still life prints, the bonito with saxifrage is a favorite.

The 1997 book by Matthi Forrer has the following translation of the poem by Toshihiro Machikado that appears on the print:

Forrer notes that the phrase “under the snow,” is the literal translation of the name of the plant below the fish, saxifrage (yukinoshita). (To be honest, I’m not sure I understand the last line. Perhaps the poet/translator used the word “under” as shorthand for “while viewing”, as in, fresh bonito tastes best…when eaten while looking out at the snows of Kamakura?  Or under a roof that is covered with snow?)

Many of Hiroshige’s works are on the internet and many have moved into the public domain so you can use them in your own projects (I put two on the back of my most recent order of personal address cards).  The CC Search tool from Creative Commons is a great way to find them, as are searches at museums like British Museum, the Metropolitan Museum of Art and the Smithsonian Institution. Following Twitter feeds from Open Culture and Public Domain Review can also help you find new sources of public domain images.

Image Credits
All images are licensed under CC0 1.0, and were found using the CC Search from Creative Commons

From the Metropolitan Museum of Art:

Trout is from the Rijksmuseum of Netherlands

Even More Resources
Other fish prints that I cataloged while preparing this post (i.e., they didn’t make cut for the gallery):

You can see more Hiroshige fish prints in the British Museum collection, perhaps at this Hiroshige Search Link.

The Woodblock Prints of Ando Hiroshige has images and commentary on his major series and the text of several books about the artist.