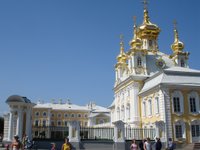 Quite a few months ago, The Atlantic Monthly had a review of a new translation of Tolstoy’s War and Peace. I have never read War and Peace, nor seen the movie adaptations, but I read the review anyway (sometimes one can pick up useful trivia in reviews, or at least read some good writing). The reviewer (novelist Ann Beattie) mentioned that one of her favorite scenes was about a German tutor trying to keep track of the dishes he ate during a lavish banquet at one of the noble houses. Sounds to me like an early forerunner of the food blogger. The scene is in chapter XVIII:

…The German tutor was trying to remember all the dishes, wines, and kinds of dessert, in order to send a full description of the dinner to his people in Germany; and he felt greatly offended when the butler with a bottle wrapped in a napkin passed him by. He frowned, trying to appear as if he did not want any of that wine, but was mortified because no one would understand that it was not to quench his thirst or from greediness that he wanted it, but simply from a conscientious desire for knowledge.

There is no mention, however, of whether the tutor carried a sketchbook and pencil to make drawings of each course of the dinner…

You can read the full text of War and Peace and hundreds of other books at Project Gutenberg.

Image credit
Photo of the Peterhof from lyng833’s Flickr collection, subject to a Creative Commons License.