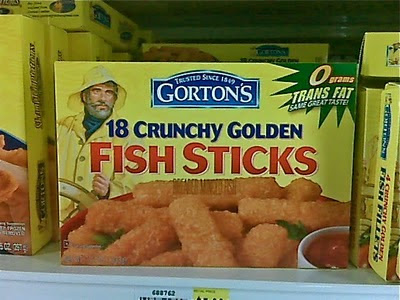 The humble fish stick — staple of school lunches and quick weeknight dinners — tells the story of American food since World War II. It tells us about technological innovation, the suburban explosion, America’s love with “the new,” and the major influence of government policy on what we eat. That I learned all of these things about fish sticks is the result of one of those wonderful library coincidences: I was in looking for something or other and I ran across an article called “The Ocean’s Hot Dog: The Development of the Fish Stick” in the journal Technology and Culture (sub. req’d). Paul Josephson, a professor of history at Colby College, gives an overview of the development of the fish stick and how it became a success, giving special attention to Gorton’s company. I’m much more interested — and suspect that you are too — in the fish stick than in corporate history, so in this post, I’ll focus on the article’s coverage of the fish stick as an example of the post-war food landscape (or, perhaps, seascape).

Fish Sticks Were Born From Blocks

After World War II, the technological capability of fishing vessels greatly improved. Ships had stronger engines and longer range, more capacity, and more powerful winches. Nets were less costly and more durable. Military-developments like sonar helped find fish. And, perhaps most importantly, the new ships were able to process and freeze their catch at sea. So, the fleet of huge ships could catch vast quantities of fish, they could process the fish into fillets and freeze them into blocks at sea. Although the quick-freezing techniques were able to freeze fish without damaging it, when the blocks were thawed, the fillets were too damaged to sell as whole fillets. So what do you do with a huge block of frozen fish? One of the first ideas was the “fishbrick”:

quick-frozen filleted fish packaged like blocks of ice cream. The main selling point was that “the housewife can cut the fish into any shape and be confident that the shape will be retained even after cooking”; no defrosting was necessary. But the First National and Kroger’s grocery stores could hardly sell the product, and moreover, most stores lacked frozen-food display cases to accommodate the bricks.

Eventually, someone realized that the blocks of fish could be a valuable product if most of the cooking was done by the manufacturer, making it a convenience food. Although it took plenty of research and development to get the details right, the basic process for all fish stick was something like this:

solid blocks of clean, white, frozen-fresh fillets were cut into stick sizes with as little waste as possible, using modern band saws. … After cutting, the fish sticks were covered with “just the right percentage of breading for maximum taste appeal.” Next, conveyors conducted the fish through automatic fryers where they acquired an “appetizing light golden-brown hue” in fat heated to between 375 and 400 degrees Fahrenheit. From there, it was on to packaging, labeling, freezing, and shipment.

A great idea to be sure, but it took much more than a band saw, some breading and a brightly colored package to make the fish stick a mass-market food.

Putting the Pieces in Place

As promising as the fish stick seemed, several things had to be in place before the product could really take off:

Government subsidies were also a major factor in the fish stick’s development and success. Canada, the U.S. and other governments helped pay for new processing plants and new fishing vessels. The 1950s saw a major expansion of the federal highway system, enabling trucks to more easily deliver product across the country. Federally-funded research in such things as freezing technology led to product improvements. Eventually, the school lunch program became a major buyer of the product.

After years of development Birds Eye, Fulham Brothers, and Gorton’s introduced the fish stick in 1953*, emphasizing “their wholesomeness, modernity, and time-saving qualities: the ‘harried housewife’ could ‘heat and eat’ fish sticks, which were nutritious, based on scientific standards, and used only such wholesome ingredients as potatoes, salt cod, shortening, and meal.” They were a big hit: within months of their launch, they had claimed 10% of non-canned fish sales. In 1953, 13 companies were making 7.5 million pounds of product. In the first quarter of 1954, 55 companies were making 9 million pounds of product. To conclude this post, I’ll let the article’s author have the final remarks:

Like many processed foods, the fish stick occupies an important place in the American diet and the American marketplace. A visit to any neighborhood supermarket reveals no fewer than a half-dozen companies producing fish sticks. Still, it is not a staple of the diet. To most Americans, fast food means beef, not fish, and even when fish is chosen it is more likely to be breaded fillets than fish sticks. Among the factors that prevented the fish stick from becoming as celebrated as the hamburger were the American palate, which often suffers from landlubbers’ taste buds, and the declining quality of many fish stick products after their initial introduction. As more and more companies entered the market, many of them sought to cut costs by producing an inferior product, one with more breading and other nonfish substances. The fish stick became the “hot dog” of the ocean; many Americans continued to feel that fish sticks were a mediocre food, and companies that strove to keep quality (and fish) at the forefront of production suffered the consequences. This may have been because producers created demand for a product after fortuitous technological innovations and social pressures had combined to create the fish stick. Ultimately, the “piscatorial engineer” — part advertiser, part salesman, and part food-product innovator — could only put fish sticks on the table, but couldn’t make consumers fill their plates.

Note
* The article is not completely clear about when the first fish stick was actually introduced. In one place, the Josephson writes that “Birds Eye, Fulham Brothers, and Gorton’s — all Massachusetts companies — introduced fish sticks in the spring of 1953.” In another place, he writes “Birds Eye … introduced fish sticks to national fanfare on 2 October 1953.” How did Birds Eye introduce the product in the spring and autumn of 1953? Or was the spring introduction a regional one (e.g., New England) and the autumn introduction a national one?