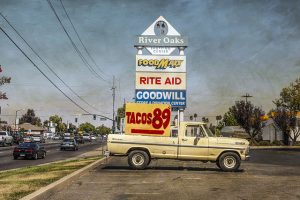 This post was inspired by Taco USA: How Mexican Food Conquered America, by Gustavo Arellano (2012, Scribner), an ambitious and entertaining book that reviews the history of America’s love of Mexican food using profiles of business people, restaurateurs, cooks, and more (my 2017 review of Taco USA).

Chain restaurants played a critical role in expanding Mexican food’s popularity across the USA 1. And so Arellano spends many pages discussing their rise (and fall, in some cases).

As I read those sections, the restaurant counts caught my attention — a chance to make charts! So I wrote down what I saw in the book, and later went to the library and internet to find more data. Annual reports were on-line for Taco Bell and Chipotle, and often had restaurant counts. For the smaller or departed chains of Chi-Chi’s and El Torito, my internet searches brought me to the company profiles at Funding Universe and an article in Louisville Business First.

Although the dataset is incomplete, I thought it worthwhile to post what I have — perhaps a commenter will fill in the blanks or suggest other chains that should be charted. (For an autosized view of the chart, visit the my chart of Mexican restaurants at Tableau Public.)

Taco Bell’s major growth was in the 70s, 80s, and 90s, reaching a peak near 7,000 locations in 1999. Chipotle’s year after year growth continues and they plan on opening new stores (although the company’s food safety issues hurt their revenues, its effect didn’t have much impact on the location count). Both Chi-Chi’s and El Torito hit their peaks around 19902.

One other factoid from the annual reports is a breakdown of where people buy Mexican food. The 2002 Annual Report from Taco Bell’s parent company (Yum! Brands) claims that market share for Mexican quick service restaurants was 72% for Taco Bell, 18% for independents, and 10% for 4 other chains3.