Before 1950, Celery Was an Extremely Popular Restaurant Menu Item

I don’t like celery, so it might have been a defense mechanism when I started noticing it on menu after menu from the late-19th and early-20th centuries1. As I looked through the Buttolph Collection of Menus for food conservation messages on World War I-era menus, it seemed that nearly every menu included celery as a distinct menu item, like the five shown below. 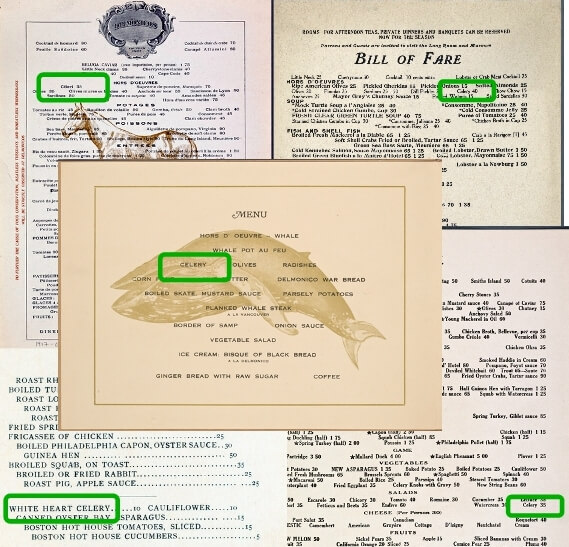 It turns out that my anti-celery defense mechanism was not biasing my judgement: celery (and other raw vegetables) were hugely popular items for restaurants of the era. A piece about the foods enjoyed a century ago from the Washington Post’s Wonkblog makes this point:

One tendency that has almost totally vanished, for example, was the practice of eating plates of raw vegetables as an appetizer. For much of the 1900s, restaurant-goers would start their meal with a plate of celery, radishes and olives. “Coffee and tea are … on almost every single menu we have, but then the third most popular dish is celery,” says Rebecca Federman, the curator of the library’s menus project.

Although I don’t like celery and am not not crazy about radishes, I like olives and can see how crisp and/or sharply flavored vegetables (along with a bracing cocktail) can help you shake off the stresses of the outside world before the real meal begins. There must also be something about celery’s hardiness, ease of cultivation, or storage convenience to make it a menu standard, but that’s a topic for another day.

Fortunately, the celery era can be charted.  The New York Public Library’s What’s on the menu? project uses crowd-sourcing to catalog the food and drinks on their vast collection of menus, so you can see the popularity of different dishes over the years, as well as the appearance and disappearance of trends (I hope that more menus are being contributed so the trends of our era will be captured — perhaps someone in a few decades will write a post like this about avocado toast).

In the current data files, “Celery” appears on 4,251 menus that have been analyzed (there are also numerous variations, like “celery hearts,” but their count is far lower). The Library makes the menu data available for download (150 MB of CSV text, filename: 2017_04_16_07_00_31_data), so I downloaded the files, spent some time understanding how they fit together, and built a spreadsheet to find menus containing celery (dish #15) and their year (thank you VLOOKUP!). After removing duplicate menus for each year (e.g., there are almost 100 menus from the Waldorf-Astoria in 1912), I calculated the normalized frequency of celery for each year (number of celery instances per year divided by the number of menus for that year), and made a chart. To give an idea about the menu availability for each year, I also made a chart for the number of menus. 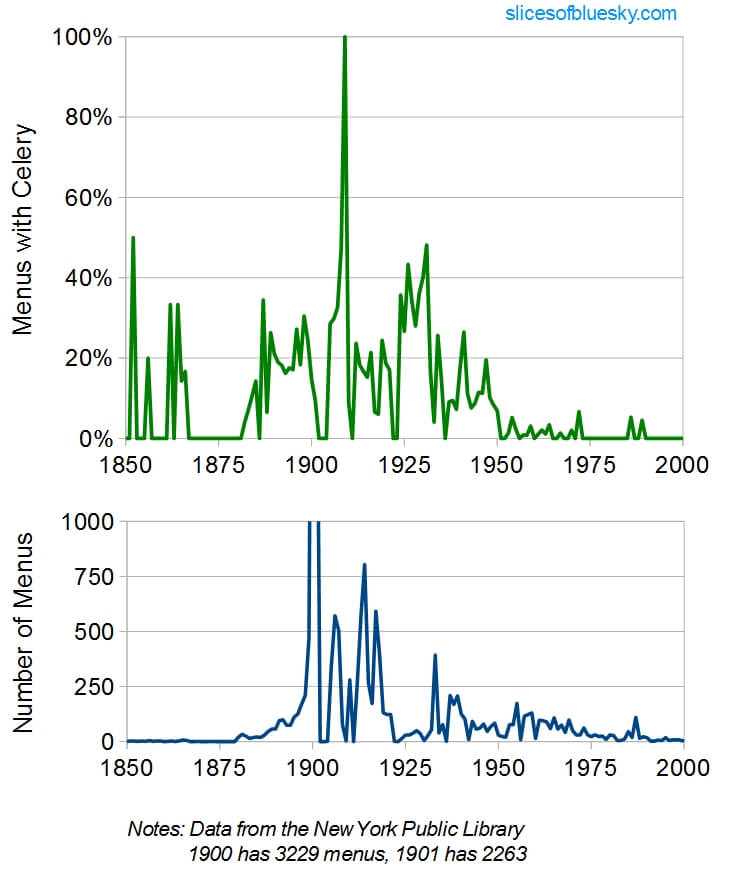 The limited information on menus presents a significant challenge.  When you ordered ‘celery,’ what did you get?  Was it a plate of raw celery?  Or pickled celery with other vegetables (like chow-chow)?  Or a salad with dressing?  Restaurant cookbooks (like The Epicurean by Charles Ranhofer from Delmonico’s), newspaper articles, and other contemporary writings might cast some light on celery’s preparation and presentation. In any case, it’s clear that the word celery was on menus much more frequently before 1950 than after. (Future menu historians might have the same issue with “avocado toast.” Was this a toasted slice of avocado? Were they serving some kind of avocado bread?)

What happened to bump celery from the menu? And what replaced it in the appetizer and salad sections of menus? Beyond a vague guess about eating habits changing in the post-WWII boom, I don’t have any solid theories, so perhaps that’s another project where the Buttolph Collection of Menus will be useful.

Image Credits
The menu collage was made from five menus from the Buttolph Collection of Menus, Rare Book Division, The New York Public Library. No known U.S. copyright restrictions.