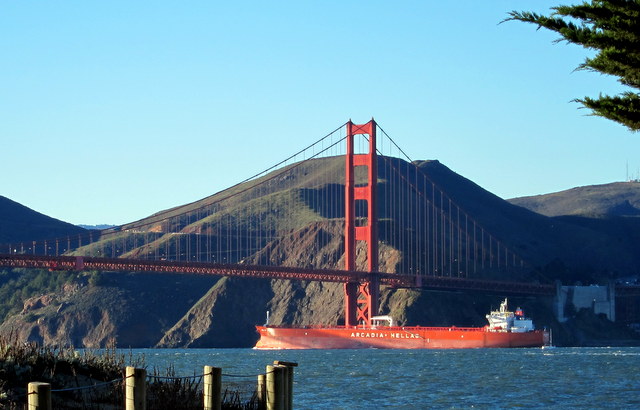 Blood was running International Orange in the San Francisco Bay Area in 2012 because its most famous structure, the Golden Gate Bridge, turned 75 in May.  Celebrations and commemorations are all over the place, including a multi-artist show called International Orange at Fort Point National Historical Site.*  In the historic 19th century fort, sixteen artists offer their impressions of the bridge’s aesthetics, history, and social impact.  The exhibits are scattered throughout the fort, allowing you to explore the building, take in the views, and see the artists’ interpretations in many small steps.  Much more coverage of the show, which ran until October 28, 2012, can be found in the San Francisco Chronicle.

Artists Interpret the Bridge and Its Surroundings

On an upper level, Stephani Syjuco set up a fake store (“A Proposition,” she called it) that displays goods in the International Orange hue, a commentary on the need to take something physical away from a place. I found the store to be deeply moving, as seeing this magical color in so many shapes hit something inside me.

A small room near the former living quarters holds Anandamayi Arnold’s remarkable “Fiesta Queen” dresses honoring the residents of the seven counties that put up the money to build the bridge.  They are even more dramatic because they are made from colored crepe paper.  (More coverage of Arnold in the San Francisco Chronicle.)

Abelardo Morell’s camera obscura room was rather dark — it took a few minutes for my eyes to adjust (too bad I didn’t bring a pirate eyepatch) — and so the images are much less bright than my digital camera made it out to be (hooray for the low-light performance of the Canon S95!). The room has two images, one as shown above, the other looking east across the Bay to Alcatraz Island. As it was sunny, windy day (and the last day of the super-boat races), there were plenty of boats on the projected image. As the boats moved across the upside-down Bay, now and then the image would contain a small, bright light — a reflection that directly penetrated the camera obscura’s aperture. Looking directly at the same scene, I’m sure the same reflections hit the back of my eye, but outside of that dark room they aren’t noticeable. Reorientation of my perspective were features of other artists’ work too.

David Liittschwager took a painstakingly detailed look at the diversity of life beneath the bridge. He collected samples of water from the Bay, brought it back to his lab/studio, and photographed the creatures he found in the water, often under high magnification, as much of the life in the Golden Gate’s waters are microscopic shrimp, protozoa, algae and so on.  He also photographed more charismatic Gate dwellers like seals and fish.  Photos are mounted on five sides of one-cubic-foot cubes, with the creature on a sharp white background.  Some of the photos of algae, in which dozens of organisms are in the frame, take on a mosaic-like quality, or — to my eyes — have a feeling of a slightly off-kilter work by Sol Lewitt.

The Bridge’s Color was Almost Accidental

The title of the show is a reference to the bridge’s color**.  The color of the bridge was hotly debated at the time. The U.S. Navy wanted a color that would stand out in the often foggy conditions and the Army Air Corps (the predecessor of the Air Force) needed visibility for its fliers, so the usual grey was thrown out pretty quickly. One design proposal from the Navy suggested a black and yellow striping. The Army Air Corps liked a red and white combination.  The final color, International Orange — a color that both stands out and successfully fits into its surroundings — came almost by accident.  During construction, the bridge was coated with an International Orange-hues primer paint to protect it against the elements until completion. Eventually, the color ‘clicked’ with the decision makers, and the primer became the final color.

*  Even without the show, Fort Point is a great place to visit. It was built before the Civil War and is located directly underneath the southern end of the bridge, and is right on the water, with amazing views of the bridge, Bay and City.

** There is more than one International Orange.  The one specified by the Golden Gate Bridge Highway and Transportation District is close to PMS 173, PMS 174 and Pantone 180.