“Bobber’s Regret”: Becoming a Flapper Could Be Stressful

Not wanting to learn to take high-quality photos for my blog, I often rely on the vast collection of public domain or Creative Commons materials on
the internet to illustrate my posts (and frankly, sometimes I think it’s more fun to see a picture of a 1940s valentine with a squash and ear of corn than a wonderfully composed picture of a bowl of zucchini-corn soup).

I typically start at The Commons at Flickr which has been the source of many of my best finds (like the aforementioned valentine).  The Commons are a work in progress, as participating institutions have loaded a massive quantity of images to the site, often without having any useful information about the image — in some cases, they are hoping that visitors to the Commons will help identify and tag their materials. Consequently, what might seem to be a simple search will sometimes lead you to unexpected treasures.

I was searching for something recently and none of the results were even close to what I wanted. But one of them caught my attention: an ad for piston rings in the Saturday Evening Post.  I clicked through and found my way to the magazine’s cover page. It was striking: a teary-eyed young woman with a bob haircut gazing in a hand mirror. To her right we see the cause of her tears: a pile of her hair. She must have just finished the major haircut and is suffering from what I call “Bobber’s Regret.” 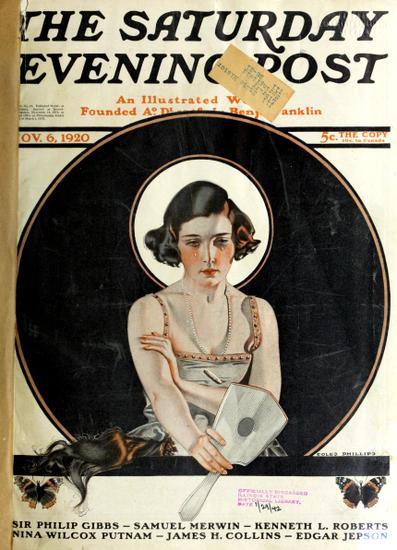 The date on the cover is November 1920, at the dawn of the in the Roaring 20s, when a short haircut was one of the things young women
did to declare a break with the past. Often called “flappers,” they wore scandalously short skirts, drank alcohol, gyrated to jazz music, rode in cars with boys, and did many other things that shocked the older generation.  (Although I haven’t read it, I bet that Flappers: A Guide to an American Subculture by Kelly Boyle Sagert has an extensive analysis of the phenomenon).

When I think about bob haircuts and flappers, my first connection is an oddly strong memory of reading F. Scott Fitzgerald’s “Bernice Bobs Her Hair” in high school English class (probably American Literature in 11th grade). However, all I remember is that I read it — all details from the story have disappeared. Fortunately, it was easy to refresh my memory.  The story has passed into the public domain, and I found it at the Gutenberg Project in a collection of stories called “Flappers and Philosophers.”

I re-read the story, and have a few thoughts: 1) it’s a fun tale with a lot of social tension — a quick visit to the 1920s upper class to watch people who “casually attended Yale” and whose lives revolve around dances and other social events; 2) I can see why we read it in high school, social pressure is a key part of the story; 3) Fitzgerald’s title detracts from the story, and reduces the tension (read it and you’ll see what I mean); 4) a sequel about the post-story lives of Bernice and Marjorie could be interesting — has Bernice’s bob brought her the popularity she was seeking?

The story is full of passages like this one that are loaded with angst and social scheming:

“Well,” said Marjorie, “no girl can permanently bolster up a lame-duck visitor, because these days it’s every girl for herself. I’ve even tried to drop hints about clothes and things [to Bernice], and she’s been furious — given me the funniest looks. She’s sensitive enough to know she’s not getting away with much, but I’ll bet she consoles herself by thinking that she’s very virtuous and that I’m too gay and fickle and will come to a bad end. All unpopular girls think that way. Sour grapes! Sarah Hopkins refers to Genevieve and Roberta and me as gardenia girls! I’ll bet she’d give ten years of her life and her European education to be a gardenia girl and have three or four men in love with her and be cut in on every few feet at dances.”

It turns out that Fitzgerald’s Bernice story appeared in the Saturday Evening Post just a few months earlier, on May 1, 1920 (see the Wikipedia page for the details). Therefore, it’s a good guess that the illustrator, Coles Phillips, was inspired by the story (or his assignment editor asked him to be inspired by it). Phillips illustrated many Saturday Evening Post covers in the 1920s, and the Post’s website has a feature on his work: Coles Phillips Exemplified Roaring ’20s Style.

Although I was unable to locate any other Saturday Evening Post covers from the 1920s in the Flickr Commons, there are surely countless wonderful historical images from the 1920s to be found in Flickr Commons, the Internet Archive and other public domain repositories (like an ad for “A Man’s Pie”).  Following Public Domain Review on Twitter is a good way to keep up with new releases from around the world.