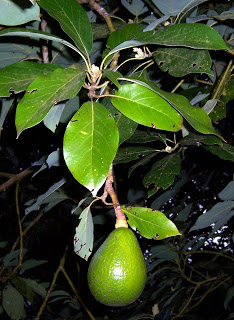 I’ve been a big fan of Rick Bayless’s television program Mexico One Plate at a Time for years — it has intensely influenced my view of Mexican cuisine and my ability to cook it. Before Bayless, I associated Mexican food with the plates of dense food covered with a thick layer of brightly glowing cheese that I grew up with in the Midwest. Through the TV program, I learned how Mexico’s cuisine is actually one of immense variety, freshness, complexity and often lightness. I also learned the basics of making roasted tomatillo salsa, how to make mole, different approaches to enchiladas, how to make corn tortillas, and much more. (Some of these lessons are in the archive of this blog.)

In several episodes, Bayless notes that avocado leaves are used like bay leaves in some regions of Mexico, sometimes are added to a pot of black beans or layered with meats to provide an anise-like background flavor and aroma. In “My Mexican Kitchen,” Diana Kennedy writes that fresh leaves are used to cover meats in barbacoa in Oaxaca and in tamales as a direct flavoring or as part of the wrapper. These uses make perfect sense if you look at the avocado’s place in the plant kingdom: they are in the laurel family, which includes the bay laurel.

For one reason or another, avocado leaves have become a minor obsession of mine lately as I have been thinking about and eating lots of Hass avocados for “the avocado project” (which I’ll describe in another post in which I examine how much of an avocado is edible). During this project, I would suspend each pit in a water bath, following instructions on from Instructables, so that someday I could have a source of fresh leaves in my garden and consequently experience a piece of authentic Mexican cooking.

But then I learned that I’ve been barking up the wrong tree, so to speak. I ran across a 1950 article about avocados in the journal Economic Botany* that explaind the basics of avocado botany, noting that there are three different “Ecological Races” of the avocado (Persea americana): West Indian, Guatemalan, and Mexican (classified as Persea americana var. drymifolia). The Economic Botany article includes this about the races (my emphasis):

Note that while the Mexican race has the anise aroma, the other two races (and many hybrids) generally do not. This is important because the Hass** avocado — the one I have been buying and trying to sprout — is a Guatemalan-Mexican hybrid.

To confirm the above statement first-hand, I went to two nurseries the other day to check out the leaves of the available varieties of avocados. It wasn’t an ideal test — it’s not reasonable to go into a plant store and start pulling leaves off of trees, so I had to look for leaves that were ready to fall off (the kind where a light breeze will separate the leaf from the branch) — but I managed to get an initial survey.  The Hass’s leaves had no aroma. The Mexicola and Zutano, two Mexican varieties, both had a reasonably strong fragrance (and the fragrance of the Mexicola has been confirmed by a friend of a friend who has with a tree in her yard in the San Francisco Bay Area).  The Fuerte, a Guatemalan-Mexican hybrid with mostly Mexican parentage (99%, according to a DNA analysis in the Journal of Heredity), had a very subtle anise aroma in its leaves.  The Bacon avocado’s leaves,which I have seen at the farmers market (from Four Sisters farm), is also a hybrid, being mostly Guatemalan, and had a fragrance. In addition, I have a friend helping me with this investigation and hope to have some new information soon.

Later that morning, I was shopping in a nearby Mexican market and spotted a bag of dried avocado leaves on a rack of specialized dry ingredients. So I bought a bag and added a few leaves to a pot of beans that I was solar-cooking. When finished, the beans had an unusual hint of anise that resulted in a overall flavor that I hadn’t before experienced.  I look forward to finding a source of fresh avocado leaves so I can get a more intense, more complex flavor from this unusual flavoring ingredient.

Notes
* Robert W. Hodgson, “The Avocado: A Gift from the Middle Americas,” Economic Botany, Vol. 4, No. 3 (Jul. – Sep., 1950), pp. 253-293
** The Hass wasn’t the most dominant variety in California until recent decades. In the 1950s and 1960s, the Fuerte avocado was the main variety in California, comprising more than 2/3 of the California crop. Today, the Hass makes up vast majority of what is grown in California and sold in the U.S. (because of liberalization of trade policy, Hass avocados are imported from many places, as this map from the Hass Avocado Board shows). The Hass itself is a relatively recent cultivar, coming about through the luck and growing skills of Rudolph G. Hass in Southern California. He eventually obtained Plant Patent 139 on the avocado variety that came to bear his name.  In his application, he wrote that “the original tree is a Guatemalian [sic] seedling of unknown parentage…[that] has been successfuly propogated on thin skinned Mexican seedlings as root stock,” implying that it is a hybrid.  A recent DNA analysis published in the Journal of Heredity found that the Hass is 42% Mexican, 58% Guatemalan.