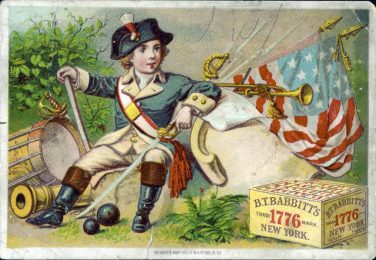 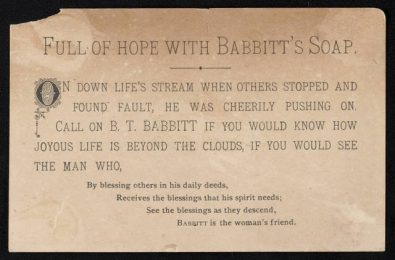 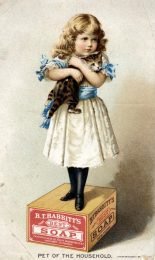 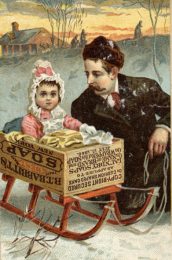 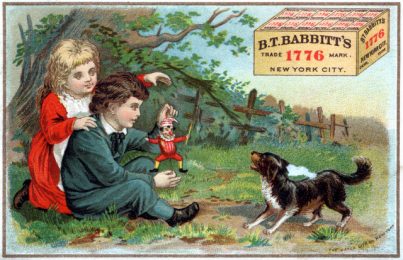 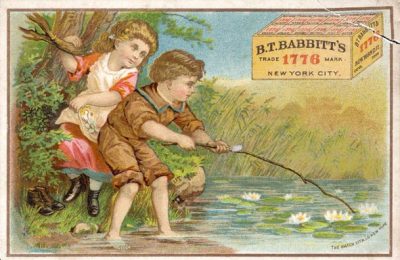 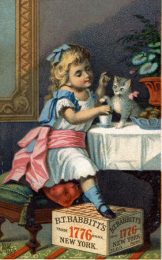 At the end of my post on the Sanitary Fair in Brooklyn to raise funds for Union Army soldiers, I highlighted an advertisement from the B.T. Babbitt company, and noted that one of their all-text ad felt as if it could have been written today. It offered free shipping for certain orders and promised a donation to charity with every purchase. Those features, plus the wording made me think that this B.T. Babbitt company was a small operation, maybe even a huckster.  I was wrong.

It didn’t take long to find out that that Benjamin T. Babbitt was a big deal: he held numerous patents, his company was an innovator in advertising, the company had multiple factories and multiple product lines, including a 300,000 sq. ft. (27,870 sq. m) factory in Lower Manhattan.

The B.T. Babbitt company was a pioneer in advertising and marketing, perhaps the first to use retail premiums to sell products in America, as they gave away free lithographic prints with purchase of baking soda 1. Some of the marketing items that survive are advertising cards: one side typically shows a cute child or two, sometimes a pet, and always a box of B.T. Babbitt soap; the other side has text that praises the soap and its proprietor Mr. Babbitt. For example:

“Full of hope with Babbitt’s soap…Call on B.T. Babbitt if you would know how joyous life is beyond the clouds…”

The Life of B.T. Babbitt

Other than Wikipedia2, a good place to start quick research on famous people is with their obituary. I found a few for Babbitt using the excellent Chronicling America resource from the Library of Congress, which contains full images of dozens of newspapers from 1777 (!) to 1963.

The history of Mr. Babbitt’s life is the history of the growth of the manufacture of soap in America. That industry is not popularly regarded as ranking among the foremost pursuits to which men devote their energies, yet to manufacture soap successfully, even when following in the beaten paths of soap-lore, requires much skill.  For the materials are rarely of the same qualities and the process cannot be reduced to the nice exactness of other chemical manipulations, and much depends on the judgement and experience of the operator.

He was born on a farm at Westmoreland, N.Y., in 1809, and had little or no formal educational opportunities, instead getting an education in farming. “When his frame became well built and able to endure the harder toil of a blacksmith,” he left the family farm and headed to Utica, where he discovered that he had mechanical genius, and soon began to manufacture farm machinery on a small scale. After accumulating $10,000 (about $250,000 in 2017 dollars3), he formed a partnership with a friend and came to New York City in 1843 to start making saleratus (sodium bicarbonate4) at No. 68 Washington St. in Lower Manhattan near Battery Park. That venture ended badly: he was cheated by his partners and left “literally without a dollar of capital.”

His next company also produced sodium bicarbonate, but soon added soap powder to the company’s portfolio. The addition of soap was the key to making his fortune. His knack for inventing served him and his company well, with numerous inventions that improved the efficiency and consistency of the soap making process. The Babbitt company’s marketing was innovative and led to it becoming one of the U.S.’s top soap brands.

At his death, Babbitt’s fortune was around $5 million (about $130 million in 2017 dollars) with his holdings including factories in New York City, Philadelphia, Cincinnati; a number of houses; and a 100-acre farm in Westchester County where he raised some of the draft horses used by his company (the Percheron breed).

A note about the New York Tribune obituary: it is very generous with addresses: “Babbitt…died…at his home, No. 35 West Thirty-fourth-st…his physician, Dr. L. F. Sass, of No. 56 West Thirty-ninth-st….he leaves a widow and two daughters, the elder being the wife of Dr. Frederick E. Hyde, of No. 20 West Fifth-third-st.” My guess about these addresses is that they are used to show that Mr. Babbitt’s doctor and children were upper-class people, living in notable neighborhoods.

The house in which Babbitt died was located at 35 W. 34th Street, between 5th and 6th Avenues. The house is long gone, as the area was massively remade in the 20th century into a commercial and retail district. For example, the Empire State Building is located across the street (it replaced the original Waldorf-Astoria hotels).

Babbitt’s obituary has a bit about industrial-scale soap production:

One of the sights of New-York to people interested in its manufactures has long been Mr. Babbitt’s six immense kettles [at the soap factory], made of heavy boiler iron, their aggregate capacity being 3,500,000 pounds [1,590,000 kg], while the value of the raw material it takes to fill them before boiling is $216,000 [about $5.6 million in 2017 dollars]. “What do you think it costs Babbitt to keep the kettle boiling?” was long a venerable joke in the trade.

An article from 10 years earlier in the November 29, 1879 issue of Scientific American has much more on the 19th-century soap making process.5.

The multi-story factory was immense, covering 23 city lots (25 x 100 feet each, 7.62 m x 30.48 m) between West and Washington Streets in lower Manhattan with overall manufacturing floor space of 300,000 sq. ft (27,870 sq. m). “The amount of raw material consumed in these works is astonishing”, with annual consumption of 70,000 barrels of white tallow (mostly from Texas), 40,000 barrels of resin (from the Carolinas), and great quantities of potash from England (I am not sure how large a “barrel” was in 1879). Unfortunately, the article neglects to mention how many workers are involved in the soap making process.

The Babbitt plant used the batch method to produce more than 100,000 pounds (~45,000 kg) of soap each day. It begins with the melting of “pure white tallow” in one of the giant soap kettles. Lye, made from potash and lime, is prepared in separate kettles and piped into the soap kettle. The ingredients are mixed and heated to boil. “At a certain stage,” common salt is added, causing the soap to form and separate from the liquid, floating on top. The liquid soap is extracted and poured into molds to cool and harden. The process takes several days, so multiple kettles are in different stages at any time: one boiling, one in the intermediate stage, another being emptied, etc. (For some background on soap making, visit How Products Are Made.)

The cooled soap is cut into bars with wires, pressed into oblong cakes, and receives a “Babbitt’s Best Soap” imprint. And then the marketing, advertising, and distribution teams get to work, selling the soap across the country.