A Less Successful Use of Arduino in Bread Making 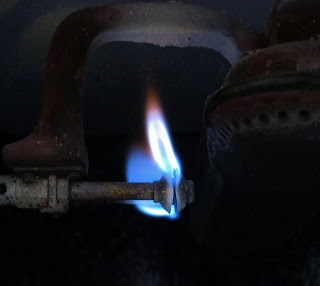 The light-bulb-based dough chamber that I posted about a few months ago was a good design and worked well. However, it requires an input of electricity to provide the heat (i.e., to run the light bulb), while there is already an appliance in my kitchen that offers “free” heat:  my oven.

My old oven (a classic Wedgewood) has a pilot light that keeps the oven chamber at about 55 °C (≈ 130 °F), so I thought that I might be able to turn the oven into a dough chamber that would take advantage of the mostly wasted heat produced by the pilot light. With the air outside the oven being cool and the air inside the oven being hot, perhaps an exchange of air would obtain the right temperature in the oven.

I probably should have done some calculations to see if this was even feasible before I started building it, but that’s not what I did. Instead, in a fever of building, I acquired a few new parts – two cheap computer fans from an office superstore and a small relay – and built the air exchange system using an Arduino Uno as the foundation of the system.  (Details about my far-too-late calculations are at the bottom of this post as an appendix.)

The system uses some of the equipment from the original dough chamber device – an Arduino Uno, a type-K thermocouple (a.k.a., TC), the thermocouple conditioning board – and adds three additional components – two computer fans and small surface-mount relay to switch the fans on and off (details about where I got the parts can be found in my first and second posts on kitchen uses of Arduino).  The fans are low-cost Antec Tricool models from an office superstore and the relay is a Omron G6K-2P-Y (5 V model). Also in the system – which is shown in the next two figures – is a terminal block, a small prototyping board, some screws, some wires, and a piece of foam core that holds the fans and covers the oven opening. The fan on the left pulls air out of the oven, and the fan on the right blows air into the oven.

I haven’t explored the lower bound for this system in my oven, but doubt that it is much below 46 °C (115 °F), and therefore the air exchange system won’t be useful for bread making.  But what other kitchen processes could use a chamber of this temperature?  Yogurt making might be one possibility.  Chocolate tempering might be a possibility if I can get more air flowing through the system. Bittersweet chocolate has a tempering temperature of about 32 °C (≈ 90 °F) and milk chocolate has a tempering temperature of about 30 °C (≈ 86 °F), so conceivably I could put a container of melted chocolate into an already-temperature controlled oven, and wait until everything reached the set point, then use the tempered chocolate for dipping or bar-making or whatever.

Appendix – Calculations of Steady State Temperature
Estimating the steady-state temperature in a “control volume” that has one inlet flow, one outlet flow, and a constant heat source is a fairly straightforward thermodynamic calculation using conservation of energy: energy flow out minus energy flow in equals the heat source (or sink). Making a few simplifying assumptions (the air is an incompressible ideal gas, flow in equals flow out, guessing the flow rate of the fan, etc.), I calculated the steady-state temperature that for a variety of pilot light powers and air flow rates. The figures below show the results, with Fahrenheit on the left, Celsius on the right. The x-axis is the power supplied by the pilot light minus the losses from the oven walls (i.e., the net energy flux into the system). The y-axis is the calculated steady-state temperature. Not surprisingly, more flow means a lower steady state temperature, as does a smaller pilot light, but it would take a small pilot or large heat losses, and large air flow to bring the temperature to my target of 21.1 °C (70 °F). Perhaps this is possible with 12 V driving the fans or some of the pilot light’s energy diverted out of the oven, but probably not worth the extra work, given that the light bulb dough chamber system works so well. 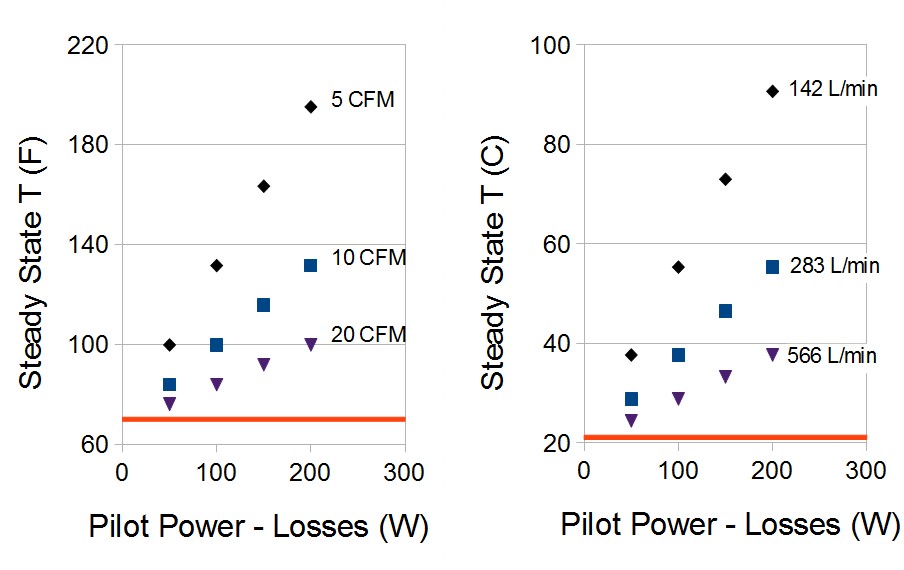