Afternoon Tea in the Laboratory: a Scientific Paper about Brewing Tea 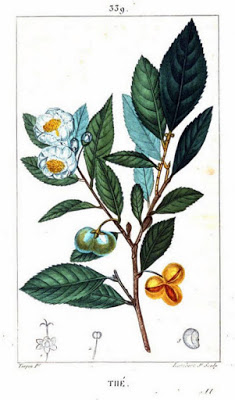 Sometimes, when afternoon fatigue weighs me down at the office or on groggy weekend mornings, my mind drifts to thoughts of tea and caffeine. How could I brew the most potent cup of tea to break out of the doldrums? What are the flavor trade-offs? Among the many choices involved in a cup of tea — brewing time, water temperature, type of tea, quantity of tea, size of tea leaves, to name a few — which are most important?

So I dove into the U.C. Berkeley library and found a few very interesting articles that helped answer my questions. Over a series of posts, I’ll be reviewing some of the papers that I found. The first one is the least theoretical, containing not a single equation. Written by five researchers from Unilever (owner of Lipton), Factors Affecting the Caffeine and Polyphenol Contents of Black and Green Tea Infusions was published in 2001 in the Journal of Agricultural and Food Chemistry.

All tea comes from the Camellia sinensis plant. There are two main variants, C. sinensis var. sinensis (also known as the China type) and C. sinensis var. assamica (also known as the Assam type). China tea is primarily grown in China, Taiwan, Japan, and parts of Darjeeling (India). Assam is grown pretty much everywhere else. In general, the Assam type contains more caffeine, with the difference depending on the source of the tea (how it was grown, where it was grown, etc.).

Afternoon Tea in the Laboratory

The authors brewed numerous cups of tea (or, more likely, flasks of tea), using a variety of brewing durations, tea leaf sizes, tea bag sizes, and a few other changes, then performed chemical analysis of the resulting brew.  Brewing the tea for 30 seconds extracted about 33% of the total caffeine from the tea leaves, a 60 second brew extracted 50%, a 120 second brew extracted 73%, and a 300 second brew extracted about 91%. So doubling the brewing time from 30 to 60 seconds increased the caffeine content by almost 50%, but increasing the time by two-and-one-half times from 2 minutes to 5 minutes only increased the caffeine level by 25%. In other words, in the early moments of brewing, caffeine easily pours out of the tea leaves, but the rate slows significantly over time. (Another post about the caffeine content of tea looks at this subject in more detail.)

They next looked at how teabag design, leaf size, and agitation influence the quantity of soluble solids transferred to the water, but did not report caffeine measurements.  I read the paper carefully without finding any indication of whether results obtained for soluble solids would be applicable to caffeine.  Nonetheless, some of the results are interesting. Continuously dunking a teabag in hot water — as opposed to dropping it in and letting it sit — dramatically increased the soluble solids:  by 500% for small leaves and by 213% for large leaves for a 4 minute brew.  Whereas an agitated teabag filled with small leaves created a stronger cup of tea than one filled with large leaves (40% more soluble solids), the opposite effect was observed for an unagitated bag:  large leaves made the tea stronger than small leaves (67% more soluble solids). Considering the size of the tea bag, a large bag made a slightly stronger cup of tea (only 17% more solids).

To get the strongest brew — or, at least, the highest level of soluble solids — use loose leaves. For a four minute brew, loose leaves gave solids levels that were 25% to 50% higher than those from the most potent teabag. For example, a 4 minute brew provided a solids concentration of 5800 mg/L for loose small leaves versus only 4500 mg/L for dynamic brewing with a small-leaf-filled teabag.  Although they didn’t mention it in the article, I’m assuming that they didn’t constrain their loose tea leaves in a metal cage or ball, which is probably not much better than a teabag in terms of letting water come in contact with the leaves.

For all of the results in the previous paragraph, it comes down to getting the water in contact with the leaves so that soluble compounds can diffuse into the water. Dunking the bag essentially forces water through the leaves while also moving the leaves around inside the bag, providing new areas for contact. A teabag limpidly soaking in the water is at the mercy of much weaker forces to bring the water and tea into contact. The paper has a technical description of the process that I won’t subject you to here.

At the conclusion of the article, the authors present data for eight black teas and fifteen green teas, all in teabags, brewed according to the instructions on the package. Of course, not all tea bags had the same shape or quantity of tea inside, so instead of being a valid brand-to-brand comparison, the results give a rough survey of what you’d find on the shelf at the market.

The figure below shows the caffeine results for the black tea varieties (arranged in no particular order).  The dashed vertical line is the mean of the results. Although most of the teas lie close to the mean, one variety had a much higher caffeine level (PG Tips), and one a much lower level (Co-op 99). I suspect, however, that the tea for each of the manufacturers changes during the year, perhaps because of slightly different sourcing or other factors, so the bars might move around. 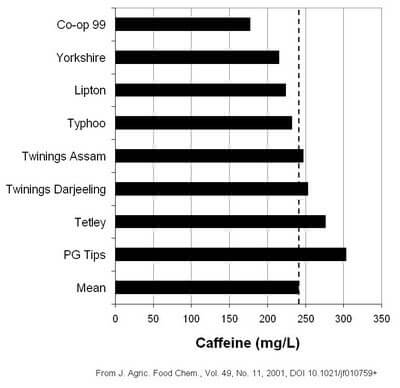 The figure below shows the results for the green teas (because I don’t want to type in the green tea brands, I’ve labeled them as A through O.)  The range is quite amazing, from 40 mg/L to 200 mg/L, with a few a good distance from the mean (indicated by a vertical dashed line). If we were to assume that the tested green teabags are a representative sample of the population, and that one were to follow the instructions on the box, it would mean that there is a 20% chance that the caffeine level will be 40% or more above the mean, and a 20% chance that the caffeine level is 50% below the mean. At the higher end, there is even some overlap with the black teas. 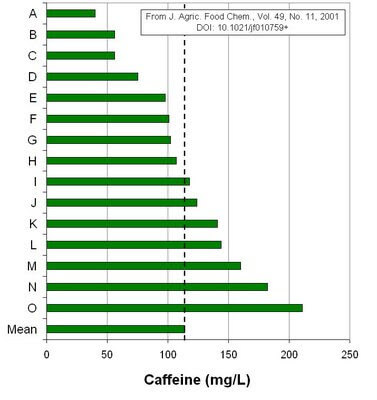 For brands C, D, and E, a double-brew method was recommended on the package. This method has the following steps:  pour hot water over the teabag, let it brew for one minute, discard the one-minute tea, add new water, brew again for three minutes, and then remove the teabag. This practice is used primarily for green teas, where it is believed to improve the flavor and also reduce the caffeine level.  Unfortunately, this article can’t confirm whether the brewing method has any effect on the caffeine because the authors didn’t perform an experiment where they didn’t discard the first minute. Based on what I have seen in other articles (one of which will be the focus of the next post on tea), discarding the first minute would reduce the caffeine content by about 50%.

Conclusions about Caffeine in Tea

To sum up some of the findings in the article by the Unilever researchers: