“If You Want to Be a Yogi and Have Heavenly Dreams…”, the New York Herald on Yoga, 1898 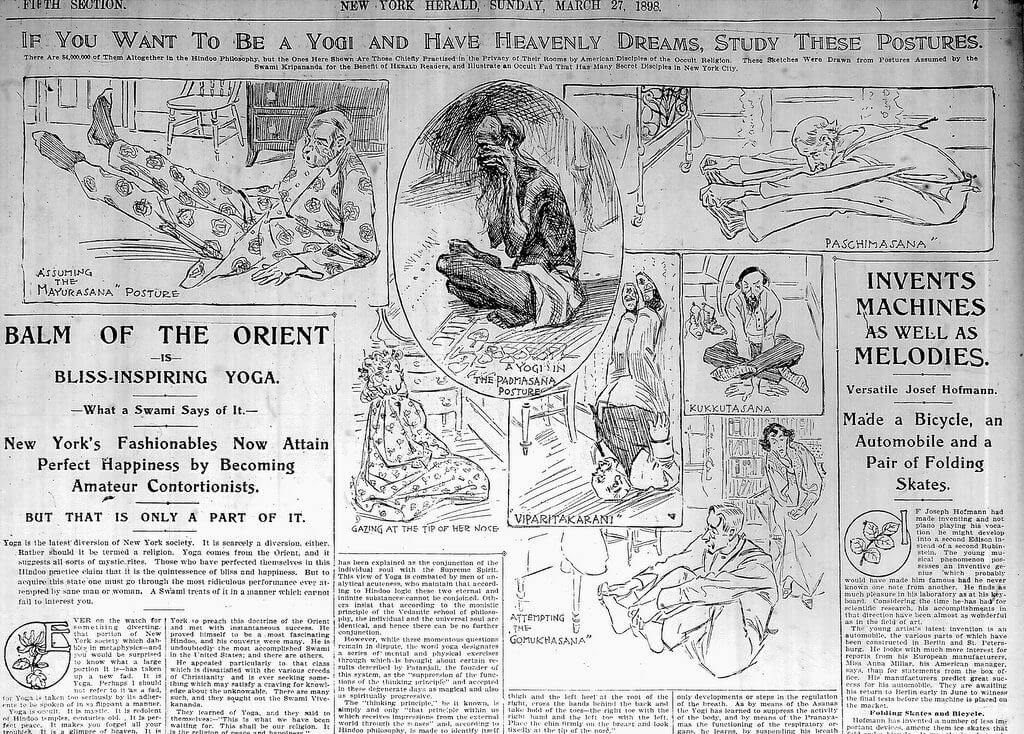 As promised, here is the full text of the 1898 article from the New York Herald on the pursuit of “perfect happiness” through yoga by “New York’s Fashionables.” The many subheadlines for the article is one of the charming things about the article, as they lead the reader into the story and pique your interest (e.g., “BUT THAT IS ONLY A PART OF IT”). It seems to be part of the journalistic style of the time, and I’m not well enough versed in newspaper history to know when it began or ended. 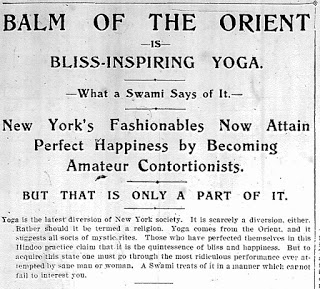 Swami Kripananda was the likely source for the information in the article, as he is mentioned in the text at the top of the newspaper page and contributed a much longer article called “Just What Yoga Is” to the same page.  In “The Subtle Body,” Stephanie Syman says that Swami Kripananda was “a renegade American disciple [of Vivekananda], one of only two Vivekananda had initiated.” His given name was Leon Landsberg, and he had been a journalist and art critic before discovering yoga and Vedanta.

To make reading easier, I’m not going to block-quote the entire piece, but instead use delimiters on each end of the article to denote what is quoted from the March 27, 1898 New York Herald.

——————Begin Quotation from March 27, 1898 New York Herald——————
IF YOU WANT TO BE A YOGI AND HAVE HEAVENLY DREAMS, STUDY THESE POSTURES.
There are 84,000,000 of Them Altogether in the Hindoo Philosopy, but the Ones Here Shown Are Those Chiefly Practised in the Privacy of Their Rooms by American Disciples of the Occult Religion. These Sketches Were Drawn from Postures Assumed by the Swami Kripananda for the Benefit of HERALD Readers, and Illustrate an Occult Fad That Has Many Secret Disciples in New York City.
BALM OF THE ORIENT
—IS—
BLISS-INSPIRING YOGA.
—What a Swami Says of It.—
New York’s Fashionables Now Attain Perfect Happiness by Becoming Amateur Contortionists.
BUT THAT IS ONLY A PART OF IT.

Yoga is the latest diversion of New York society.  It is a scarcely a diversion, either. Rather should it be termed a religion. Yoga comes from the Orient and it suggests all sorts of mystic rites. Those who have perfected themselves in this Hindoo practice claim that it is the quintessence of bliss and happiness. But to acquire this state one must go through the most ridiculous performance ever attempted by sane man or woman. A Swami treats of it in a manner which cannot fail to interest you [sic “of it”].

Ever on the watch for something diverting, that portion of New York society which dabbles in metaphysics — and you would be surprised to know what a large portion it is — has taken up a new fad. It is Yoga. Perhaps I should not refer to it as a fad, for Yoga is taken too seriously by its adherents to be spoken of in so flippant a manner.

I know it to be a fact that there are scores of men and women, perhaps hundreds, well known in New York’s fashionable circles who have taken up Yoga in their ceaseless efforts to do something — well, something different. You would be astonished could you get a glimpse into some of the Fifth avenue boudoirs where the Swami Vivekananda’s teachings have taken root.

You might see my lady, clad in the loosest of flowing robes, sitting on the floor for hours at a time in some ridiculous posture, gazing intently at the tip of her nose. Or you might see the leader of masculine fashion in the seclusion of his apartments in pajamas or a dressing gown, seated in an equally preposterous position, holding his breath as long as he can and repeating over and over that monotonous monosyllable “Om” which is Hindostanese for the Supreme Being.

The Swami Vivekananda came to New York to preach this doctrine of the Orient and met with instantaneous success. He proved himself to be a most fascinating Hindoo, and his converts were many. He is undoubtedly the most accomplished Swami in the United States; and there are others.

He appealed particularly to that class which is dissatisfied with the various creeds of Christianity and is ever seeking something which may satisfy a craving for knowledge about the unknowable. There are many such, and they sought out the Swami Vivekananda.

They learned of Yoga, and they said to themselves:—”This is what we have been waiting for. This shall be our religion. It is the religion of peace and happiness.”

And they set about to acquire a knowledge of Yoga. They flocked to the seances of the Swami Vivekananda. He told them of the perfect peace known only to the Hindoo Yogi. And they said to themselves, “We will also be Yogi.”

Then he told them how they might be come as the erudite men and women of the East. He instructed them in the preliminary steps. He explained to them various strange postures which they must assume, illustrating his teaching with his own supple body, long trained to such acrobatic feats.

He described “viparitakarani,” which consists of raising the body in the air by resting the crown of the head and the shoulders upon the ground and supporting the loins with the hands. And “paschimasana,” in which you stretch out both legs, and, having taken hold of the toes with the hands, place your forehead upon you knees. And “gomukhasana,” in which you put the right ankle on the left side of the chest and similarly the left ankle on the right side.

These and many more postures the Swami illustrated to his converts, telling them of the delightful results to be obtained from each. And the converts went home and tried to do likewise, to their great discomfort and the threatened dislocation of many joints. And they are still trying, and some there be who boast of success.

Surprising as this conditions of affairs is, you would be still more surprised could I disclose to you the identities of some of the prominent New York men and women who are practising Yoga. But that is not to be considered. Vivekananda has also many converts in Boston and not a few in practical Chicago.

In Cambridge, Mrs. Ole Bull has donated a large sum of money to Harvard for the purpose of establishing the study of occult philosophy, and so deeply imbued is she with the spirit of Yoga that she has gone to India, there to delve into its mysteries amid more harmonious surroundings.